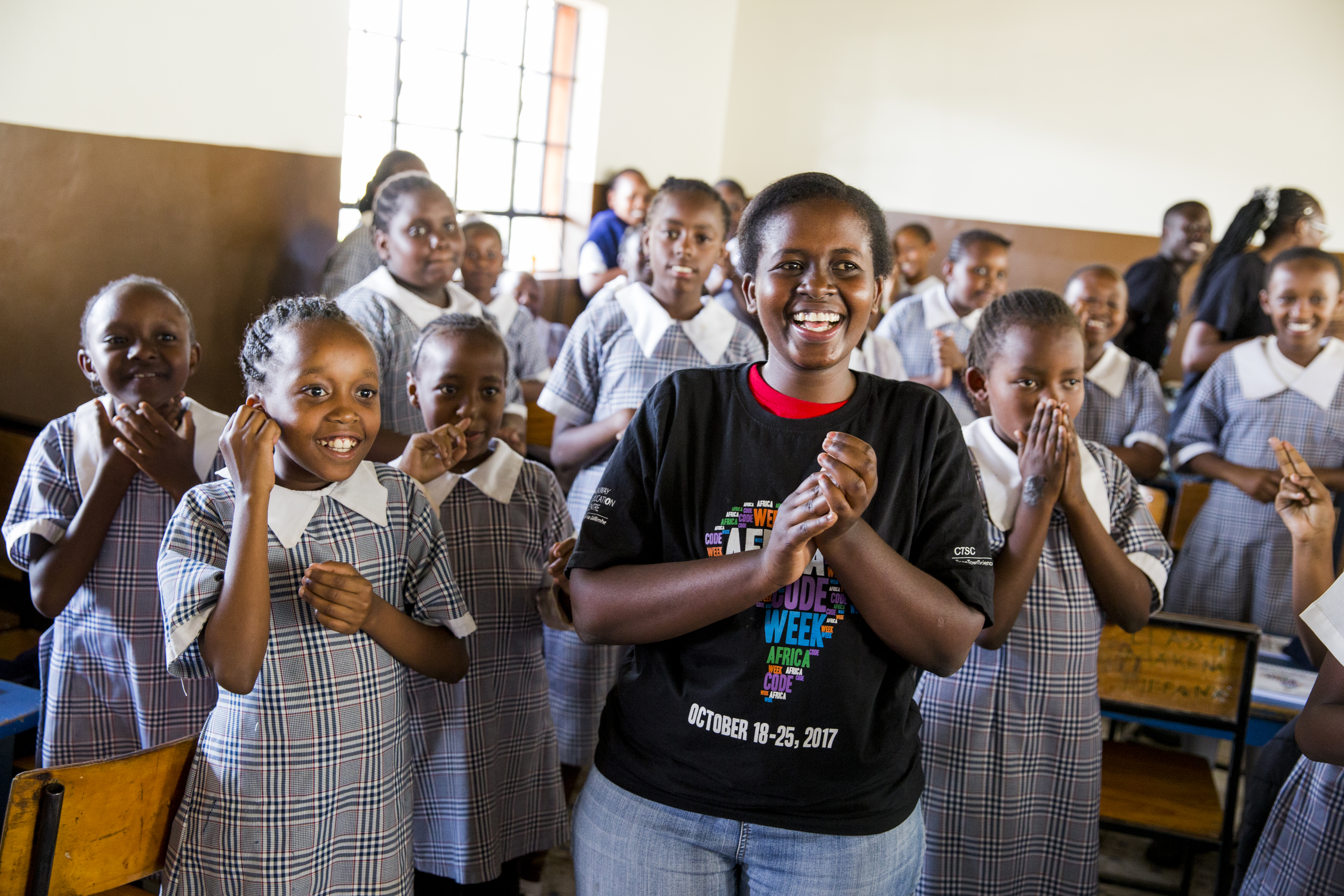 Africa Code Week is a perfect fit for our work to use technology to train and inspire youth. It is important to have such programs because it helps bring up developers who will be capable to solve some of the world’s problems using emerging technologies.

At Jomo Kenyatta Primary School, we trained 30 students (ages 11 and 12) how to program, and partnered with the Society of Engineering Students (SES) club and the Women in Tech (WIT) group at Jomo Kenyatta University of Agriculture and Technology.

YTF trained 60 pupils between the ages of 9 and 13 at Makena School, where volunteers from the University of Nairobi joined us.

YTF master trainers and volunteers brought their computers to use throughout the training. The students are eager to learn the technology, but do not have access at home or in school.

Through Scratch, the students learned to build games, animations and create interactive stories.

Insights and stories from the schools

Our trainers were challenged when Branson, a class 7 pupil at Jomo Kenyatta Primary School, wanted to create a game using Scratch by himself. His group managed to do more on Scratch with this effort, as they learned most features that came with the software.

Mercy Wanjiru, a pupil at Makena School, said she is excited to learn about Scratch and she would love to become an engineer when she grows up. Her group created a story after learning features in the software.

Medrine Jumba, a teacher at Makena School, said she is grateful to have Scratch introduced at the school, noting the program was necessary since it made the pupils interested in technology.

Mercy Kwambai, chairlady of the Women Techmakers group, said, “Africa Code Week is a good opportunity to introduce programming to young ones and it’s important to have such a program to make kids know what is happening and new things apart from what they learn in their syllabus.”

Technology is the non-negotiable tool for the next generation of young leaders to rise and come up with solutions for their own communities and the world at large. These young people have so much potential and the earlier they are exposed to technology, the better.

While Africa Code Week is an incredible resource for developing in-demand skills, we take a particular interest in ensuring girls and women have a seat at the table. Our Africa Code Week activities included a two-day boot camp for women, #GirlsCodeNairobi2017, as part of the G20’s eSkills4Girls initiative.

YTF collaborated with Jomo Kenyatta University of Agriculture and Technology (JKUAT) to facilitate this year’s eSkills4Girls event. Forty university-age women participated in the boot camp. Most of the participants were beginners in programming, with a few having intermediate knowledge.

With a focus on data security and verification, participants were taught database and web security. They learned to code using programming languages like HTML, CSS, and PHP.

After learning the basics, the group dug into hands-on programming skills to better understand and put their new skills into practice. They created a general web validation form, and from that were prompted to create a school based registration form that stores data for the students. The group then used CSS to style the validation form.

The training also involved major database linking/configuration with PHP, including an interactive session with step-by-step development instructions for a webpage.

Many participants expressed their satisfaction with the #GirlsCodeNairobi2017 boot camp, indicating it gave them a much deeper understanding of what data security and verification systems involve. By developing knowledge in web programming, the camp made the women more confident and competent technologists.

We invited Miriam Kakii to speak as an Institute of Electrical & Electronics Engineers (IEEE) advocate and a fourth-year student in telecommunications engineering at JKUAT.

Chairlady of Women Techmakers and a lead in the Google Developers Group, Jillo Mercy, shared information on what the club does and how students can get involved.

We had a speed mentoring session with Phylis Ngigi from the JKUAT Women in ICT chapter and Amy Keitany, a telecommunications graduate engineer from JKUAT who works with Cross Frontier International.

Fourth year student and computer science major, Shalon Njeri, delivered a presentation to participants summing up her experience. She said, “eSkills4Girls is a great platform because it gives you a place to start and learn how to use technology. It’s really great experience.”

Stacy Wangari, an IT student in JKUAT said, “Empowering a lady is empowering the whole world. They are the backbone of the world.”

Reflections from the Week

Given the recent situation in Kenya regarding the 2017 elections, it is evident that the government needs qualified women with technology backgrounds can help prevent situations where data is compromised. Women often bring a good combination of technical skills and attention to detail in coming up with workable solutions.

The prototypes created at the events were a foreshadow of solutions that the women can innovate for their communities, environment, government, and the private and public sector on a large scale. It begins from an idea.

YTF is grateful to Google, Cape Town Science Centre, and SAP for their support of Africa Code Week.