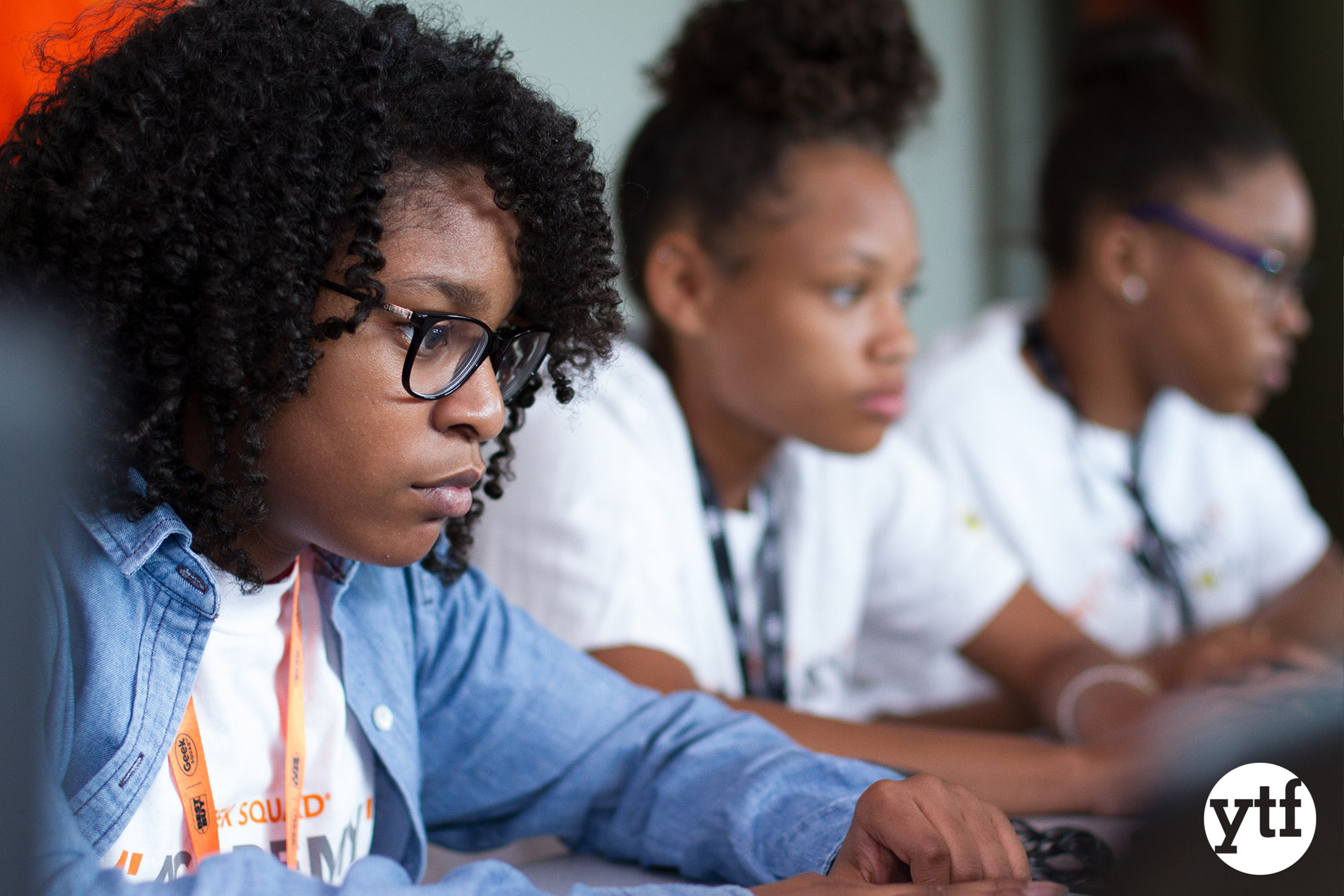 An enthusiastic group of middle school girls gathered near our headquarters in Louisville, Kentucky last week for a two-day STEM summer camp, hosted in partnership with Best Buy’s Geek Squad at the Louisville Central Community Center.

Each day was jam-packed with different classes, giving the participants a variety of experiences with new STEM-related concepts and equipment. Guided by instructors, the girls experimented with 3D printing, html coding, online and technology safety, film making, and BB-8 robotic programming.

Before digging into courses, the girls divided into teams and chose names. We loved hearing their creativity come out even in this opening task. Groups landed on LOL Cats, Geek Girls, Megapixels, Digital Divas and Code Chicks – all aptly-named teams for a summer camp full of empowerment, inspiration, and STEM. “I enjoyed learning SketchUp for 3D printing. I thought it was cool because I never saw a 3D printer before,” said 11-year-old Paola.

In the 3D printing class, girls referenced systematic instructions for their tasks projected on the front wall. A 3D printer in the middle of the room worked on a product designed by the Geek Squad instructors to show the students how their models on the computer could come to life.

The girls began navigating the free SketchUp program through an introduction to architecture as they learned to build a house. They learned to turn a rectangle shape into a 3D image by using a push/pull function, and created a roof by learning where to place other shapes.

The instructor used a cardboard box to show a physical example to the students as they followed his step-by-step instructions on their screens.­

As the camp progressed, students worked with smaller objects and more details. They were able to model a table or a chair, and add color or different shaped designs on the object. Girls learned how to create a design with specific dimensions and explored more advanced capabilities of some of the tools.

As soon as the students got a grasp of the basics, they had a chance to play around and use their creativity to build the rest of their object, whether it be a house, a table, a chair, or something of their own creation. The instructors also recommended practicing with SketchUp in the future as it is free software.

Through the 3D modeling in SketchUp, students applied key math and science concepts, such as geometry.

“I’ll use this in my STEAM class at school because we are also taught 3D printing in that class,” declared 12-year-old Tiza. From Film to Robots: Digging in to Unique Skills

A Film and Script class produced young movie-makers out of every student. Girls were invited to create movie ideas and act out the parts. They could barely contain their giggles as they watched their acting on film during the editing process, which was completed at the front of the room for everyone to see.

During the Web Know How class, Geek Squad instructors taught HTML coding and set challenges for the students to instill competition and encourage creativity at the same time.

“I can code now and make my own website,” announced 12-year-old Imani.

In the BB-8 Programming class, the girls started out “programming” humans to do simple tasks like making a peanut butter and jelly sandwich. They learned that they had to be very specific when giving commands. Then they moved onto programming BB-8 droids to complete different routes like squares and Xs, and avoiding obstacles by changing speed, direction, location, and duration.

“I enjoyed the BB-8 droid programming class because I got to play with the droid and chase people with it,” said 13-year-old Juliana.

The students saved their final creations for many projects on flash drives, allowing them to show their parents at home what they worked on at the camp.

A Digital Compass class rounded out the camp, encouraging safety when using their knowledge in technology.

“I know now how to be safe online and why it matters,” said 12-year-old Ava. Hope for a Promising Future

The Geek Squad instructors created a fun, summer mood as they filled the two days with chants and shouts. As soon as anybody said the word “cool,” a Geek Squad member replied with “very cool!” To cap off the camp, instructors handed out graduation certificates to recognize the girls’ new STEM experience.

“I can be ahead of what’s coming next,” reports 10-year-old Kassandra.

We hosted this camp to inspire young girls and show them a wide range of STEM-related opportunities they can pursue in the future. We are thankful for the support of the Geek Squad instructors, who gave affirmation when the students did tasks correctly and coached the girls to accomplish functions on their own. We saw a promising group of young ladies become accustomed to using their girl power, taking a critical step to help change their futures and their world.

This event would not have been possible without an incredible group of sponsors and supporters. Our gratitude goes to Metro United Way, Louisville Central Community Centers and Louisville’s first Gigabyte Experience Center, University of Louisville Society of Women Engineers, and Best Buy.